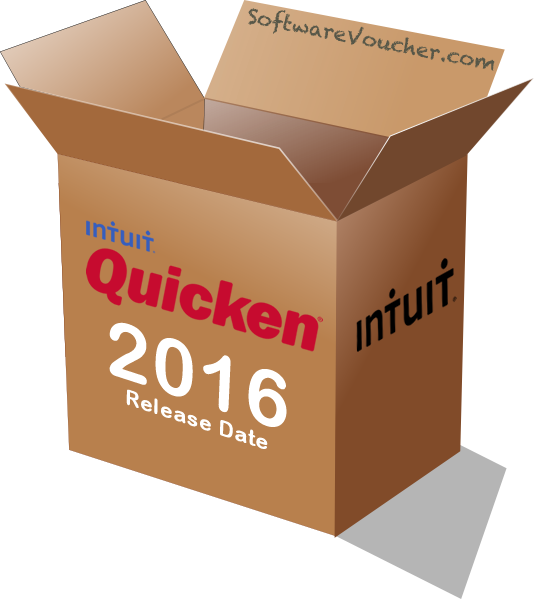 Updated November 17th, 2015: Thanks for everyone commenting below and for being on top of the latest Quicken news – Intuit has officially released all of the 2016 versions. You can see this page for all the details on what’s new and improved in the this release (both in Windows and Mac versions).

Did you already buy upgrade? What are your thoughts about the 2016 release?  Let us know in the comments section down below!

Updated November 16th, 2015: Although the 2016 versions of Quicken are not yet available at Intuit’s own store, Amazon has just started selling and shipping all versions and has posted the full product descriptions/2016 changes with each product… best of all, they are all (as you would expect from Amazon) already on sale! Here’s a look at your options:

Most versions are available in either the downloadable format or, if you need the box with installation disc, can be shipped out to you for free. Of course sale prices may change at any time so check out their site for today’s sale price and offer details.

Staples is also having a deal on all of the new 2016 versions of Quicken over the upcoming Thanksgiving weekend (Black Friday!) – Check out page 13 of their ad scan at BlackerFriday.com for sale details.

Updated October 8th, 2015: We just received a forwarded email from one of our readers (thanks Steve!)… It appears that Amazon contacted customers who pre-ordered one of the Quicken 2016 products early (originally with a posted October 4th ship date) with an apology for the delayed released and a $10.00 store credit a make up for it. They also shed some more light on when Quicken 2016 would be released – They quoted a November 18th release date. Here’s the full text copy of the forwarded email we received:

We’re writing about the pre-order referenced above for “Intuit Quicken Deluxe 2016,” scheduled for release on October 4th, 2015. We recently learned that the release date has been postponed to November 18th, 2015. We’re very sorry this happened.

As a result, we’d like to offer you a $10 promotional certificate to apologize for the delay. This amount has been applied to your account and will be automatically applied to your next order that is shipped and sold from Amazon.com.

We look forward to seeing you again soon.

If you’ve also received the same email from Amazon or another Quicken reseller then let us know in the comments section at the bottom of the page!

Updated October 2nd, 2015: Thanks to a tip from one of our readers (thanks Brent!), for the first time in at least the last 10 years (and possibly more), it’s been confirmed by Intuit that Quicken 2016 products will be released much later this year… in November! Here’s what they said just a few hours ago:

Quicken 2016 is coming in November! You will see Quicken 2016 for Mac and Windows arriving in time for the start of the 2015 holiday shopping season. We appreciate your continued loyalty and for counting on us to help you stay on top of managing your money.- Kathryn, Quicken Employee

What we don’t know is why we need to wait this long for the 2016 versions, especially given that the release date was previous set for October 4th (as reported from Quicken resellers). As soon as we know more we will update the details here on this page.

Updated October 1st, 2015: October is here but Quicken 2016… is not. We were expecting to see the new products to be released a few days and at the very latest today, but all of Quicken’s resellers and the official store still have the 2015 versions listed. In all the year’s we’ve been tracking Quicken product launches, this is the first time that we’ve not see it out by this time of the year.

So what isn’t it released yet? We have a few theories, but the most probable reason is that it has something to do with the announcement about a month ago that Intuit is planning on selling off a few of their smaller product lines, with one of them being Quicken. While we still hope the new products will be released soon (Amazon originally had an October 4th release date – See below for the links), but it’s hard to say at this point what will happen, into who’s hands Quicken will go to and when, and then what the new owner of the software will decide to do.

As soon as we know more, we will post the news here on SoftwareVoucher.com.

Updated September 28th, 2015: Amazon just removed the Oct 4th ship date from all of their Quicken 2016 pages and released it with a “currently unavailable”. We’ve see Amazon do this in the past on other products right before the ship date so we’re hoping that the new products will be released a few days sooner. If not, then we’re pretty confident that by Thursday (October 1st) it will be officially released by Intuit.

Updated September 16th, 2015: Amazon just posted their pre-order pages for Quicken Deluxe 2016, Premier 2016, Mac 2016, Home & Business 2016, and Rental Property Manager 2016. They have a release date listed as October 4th, 2015 but we expect it to still be available at the end of this month (the last few years we saw the same thing with a Amazon listing an October ship date and then changing it later to the end of September).

Updated August 28th, 2015: We first received an email for one of our readers and now we are reading about it in a Tech Crunch article that Intuit is looking to sell off a few of their business units, including Quicken. Layoffs of 249 employees in the Small Business unit has already begun.

So what does this all mean for the future of Quicken? It’s had to say but it really depends on who picks up Quicken. This could actually be a good thing for Quicken users as a fresh set of eyes and a new set of developers might be able bring back the software to it’s glory days once again. As soon as we know more, we’ll post it here on SoftwareVoucher.com.

In terms of the Quicken 2016 release, it’s likely that the majority of the work was already completed months ago and we expect Intuit to release it, as they have done in the past, by the end of September.

Updated August 25th, 2015:  Look’s like Quicken’s resellers are gearing up for the 2016 release of Quicken. Sam’s Club has posted their pages for Deluxe 2016 and Home & Business 2016, although there are no product images or descriptions available as of yet so we can’t yet report on what’s new and improved in this upcoming release.   Be on the lookout for the 2016 versions released at the end of September.

Updated July 22nd, 2015: For those of you that are interested in Quicken Willmaker, the new 2016 features have just been announced. We’re still waiting on news for the other Quicken products including Deluxe, Premier, and Home & Business.

Willmaker 2016 is not yet on sale but can be pre-ordered at both Amazon and Walmart. We expect it to be out by the end of August.

Here are the major changes coming to Quicken Willmaker 2016:

Updated July 21st, 2015: It’s hot outside, with summer in full swing across the country. And it’s that time of the year again where we start our countdown to the 2016 release of Quicken software. Being the software geeks that we are we’re always excited when the updates come around and look forward to reviewing the changes. And after watching Intuit’s releases for the last decade, predicting the next release date is not that difficult as the new versions are usually released around the same time every year. Here are our expectations:

Quicken 2016 versions are expected to be released in the last week of September, 2015.- Expected Quicken 2016 Release Date

We just saw two anomalies last year – One was was Quicken 2015 for Mac was released in mid-August, about 6 weeks before the 2015 PC versions became available. That’s because the mac version wasn’t updated for nearly 7 years and didn’t follow the PC version release date cycle. From what we now know, it will probably be updated with all the other PC versions in the 2016 release cycle.

The second anomaly was that Amazon and several other resellers starting selling the 2015 versions a week before intuit.com had the new versions updated (we usually see things the other way around where resellers get the new software versions later than those offered at the manufacturer’s website).  We’re not sure it this will repeat itself or not this year again.

Every year we put this list together and, unfortunately, often some of the same things just keep finding their way on our wish list year after year (here’s our 2015 wish list). Here our some of our top feature and functionally requests for the 2016 release:

What do you want to see changed in Quicken 2016?

What would you like to see changed, improved or added in the 2016 release of Quicken software? Leave your thoughts in the comments below!