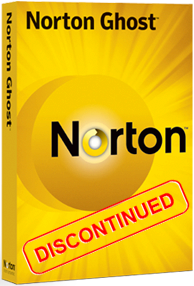 For those of you waiting to get Norton Ghost 16 in hopes that it would be compatible on your Windows 8 PC, we have some bad news. As of April 30th, 2013, Norton Ghost has been officially discontinued by Symantec. The last version available is Ghost 15 but that is only compatible with compatible Windows 7, XP, and Vista. As for the official reason as why they are discontinuing it, Norton states that backup and recovery services have already been built and incorporated into other Norton products so there is no reason to keep it as a standalone product. They encourage customers to try their Symantec System Recovery 2013 Desktop Edition instead (a 60-day free trial is available).

Can I still buy Norton Ghost 15?

Yes! Although you no can longer purchase Ghost at the official Norton online store, a number of resellers still have it in stock and on sale. Our favorite place to check is at Amazon which currently has it on sale for as low as $19.88 per license (that’s over 70% off the list price of $69.99). Once resellers run out of stock, eBay will probably be the only place let to still find a license.

If I still buy Norton Ghost 15, will I have support?

Norton has stated that all customers will continue to be provided with product support via chat with customer service and through their knowledge base up until July 31, 2017. After this date, the product will no longer be supported by the company.

There are several other disk cloning and imaging software programs out there. One of the most popular is Acronis True Image but it’s not super cheap at $50.00 per license. You can also look into a program called Trinity Rescue disk. If you’re using a Windows-based PC, then Microsoft Deployment Toolkit and Windows Deployment Services are free. They may not have all of the bells and whistles as you will see with Acronis but it will get the job done.

Let us know what you’re switching to in the comments section below.

Signup to our exclusive release date notifier and we will keep you up to date on all of latest software releases from Norton: