Updated May 25th, 2015: It’s hard to believe that it’s already been 8 months since Fusion 7 was released. That means that we are getting closer to version 8 which is expected to come sometime in September/October. We’re already tracking all of the latest news so be sure to checkout the latest developments here.

Updated September 3rd, 2014 – VMware Fusion 7 has just been released! Be sure to see all of the new features now posted here at vmware.com.

We’re putting together our review and will post details here shortly. For those looking for a deal, be sure to see our VMware Fusion 7 coupons page for the latest offers and promotions. We also have the list of features and comparisons between Parallels Desktop 10 vs. Fusion 7.

Important note – If you recently purchased Fusion 6 from vmware.com directly or from an authorized reseller, then you may qualify for a free upgrade to Fusion 7.

Updated August 20th, 2014: Parallels has just announced Desktop 10 for Mac so expect VMware to release Fusion 7 within the next few days. Last year both companies released their updates on the same day and previously only a few days apart. We’ll post more details here as soon as we have them.

Updated July 31st, 2014: VMware just released the Fusion 7 beta. If you’re interested in testing it out, which is free by the way, then you have until October 15th, 2014 to download and register the copy. Once you install the file, be sure to enter the provided serial number.

Here are the new features included in the beta (taken directly from VMware.com): 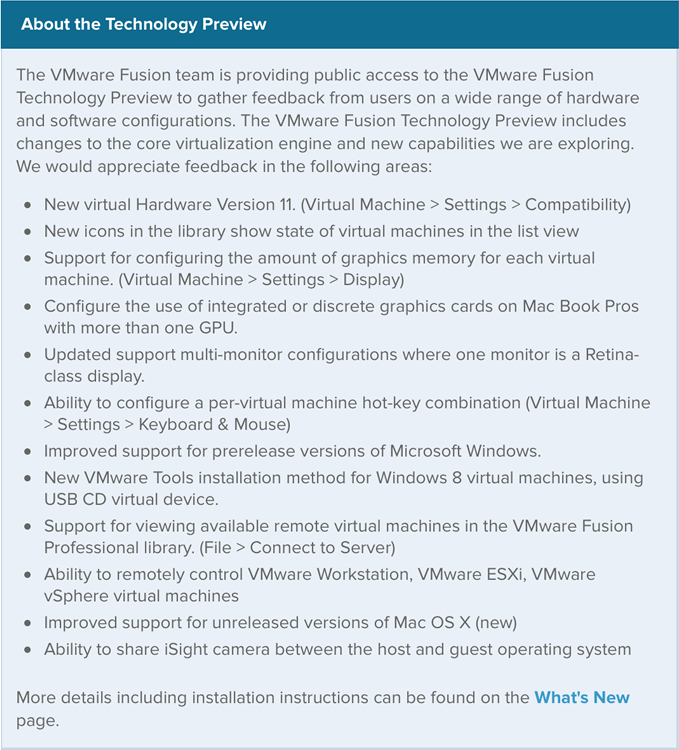 With OS X Yosemite coming this Fall, you’re guaranteed to see VMware release Fusion 7 at just about the same time (Parallels Desktop for Mac 10 is also set to be released). And if you’re like us, you don’t want to be stuck buying software that’s just about to be outdated with a new release. When it comes to desktop virtualization software, running the latest versions will cause you less headache down the road and better performance (especially when upgrading your operating system). So when do we think VMware Fusion 7 is coming out? Here’s our predication:

Fusion 7 from VMware is expected to be announced and available for purchase during the end of August 2014 (around the time of the official Apple OS X Yosemite release).- Rumored VMware Fusion 7 Release Date

We base our prediction on a few factors, including looking at both previous releases dates and the major operating system and programming changes from Apple and Microsoft. In terms of release dates, we’ve seen a new version come out annually (except in 2010) in the fall time frame.  Here’s the full history of Fusion releases:

Both VMware and Parallels have close relationships with Apple and the development teams on both sides are already working on the next update, so lookout for these to be timed pretty close together (during the last release, both companies introduced their updates on the same day).

What if I buy Fusion 6 right before version 7 is released? Am I stuck with it?

Similar to Parallels, VMware has offered a Technology Guarantee Program; if you purchase the current version of Fusion up to two months before the new once is released, you can qualify for a free upgrade. This offer was valid for orders made through them directly at vmware.com and any authorized reseller. Now, we can’t promise that the same guarantee will be back again this time around, but from all that we’ve heard, we’re pretty confident things won’t change. For the rest of us that don’t fall into the free upgrade window, the upgrade discount for up to two-version back will apply (50% off Fusion Pro).

We’ll continue tracking all of the latest Fusion 7 developments and news and will be updating this page with new information as soon as we get it. What would you like to see changed in the next version? Let us know if the comments section below!