Updated May 11th, 2015 – Maybe you learned about it from an email or possibly a post card in the mail, either way, if you didn’t know about it it might have come to you as a surprise that all Windows-based versions of Quicken software has an expiration date. Well, in reality it’s not really an expiration date as your software and data will continue working for as long as you use the software. However, Quicken shuts off all online services three years after the software release date. That means key features like online bill pay, downloading bank and other financial data, and uploading your data to quicken.com all stop working on a predetermined date. That also includes all live technical product support.

What are the expiration dates by product?

All web-based online services for Quicken Windows-based products expire based on the version year, not on the date that it was purchased, which happens three years after the version-year was first released. That’s why it doesn’t make sense to buy older versions of Quicken or at the end of the product year – It’s best to wait and buy the newest version to take advantage of the most time to use their services.

So what are the end dates by product year? See below for expiration date by version year.

The good news is that all of the “Essentials for Mac” versions and Quicken 2015 for Mac do not fall under the Quicken service discontinuation policy. So regardless what year you own up until, you’ll enjoy all of the features for as long as you own the software.

What are my options to extend the online services?

Your only options to extend service is to upgrade to a newer edition.  However, it’s been reported by multiple users that Intuit gives free upgrades to certain folks. Specifically, we’ve found out that those that have a paid Quicken Bill Pay subscription are often (not ALWAYS, but often) offered a free upgrade to the new version right before the  services expiration date.

So why is this?  That’s because Quicken doesn’t want to loose the $120.00/year they receive from Bill Pay customers – And they would loose it because all those add-ons services, even the PAID ones, stop working at the three-year mark. So to prevent loosing a customer completely they often will give away the upgrade for free.

But as you can imagine, Quicken is not that fast in offering the upgrade. Intuit first begins with sending emails to their customers months in advance warning of the impending shut-off awaiting for the online functions. So for example, if you currently using Quicken Premier 2013, then you can expect to begin receiving these notices in January 2016. Then later in February and March you’ll probably receive a few more emails and possibly post-card to the home/business office they have on file with some sort of coupon code it you upgrade right away.  But if you hold-off until the beginning of April, you’re likely to be one of the lucky ones that are offered a free upgrade just like the one we got below: 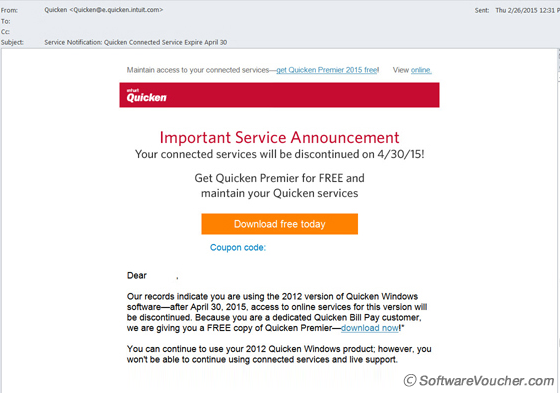 But with that being said, if you do not use any paid add-on services from Quicken, like bill-pay, then it’s highly unlikely that you will be offered the free upgrade. Fortunately, we are tracking all of the latest discounts and deals for all of the current editions of Quicken. Select one of the products below to learn more on where to find the best price on your upgrade version:

Where can I learn more about Quicken expiration dates and the discontinuation policy?

Quicken has some faq’s posted on their site where you can read up a little bit more on the policy. Of course the nitty gritty details are located in their terms of use (those that most of us click to agree at the time of purchase without reading them).

Leave you thoughts, comments and concerns below!

Join our release date notifier list and we will let you know the moment Quicken releases all of their 2016 versions!

See all our current Quicken deals: